The Asia Pacific countries, including the PRC, India, and ASEAN members, have been undergoing transformations in recent years thanks to recent economic growth. These countries enjoy advantages in the scale of labor forces, resources, and markets, which have made the region a focus for global economics and geopolitics. In this backdrop of rapid economic development, the Asia Pacific is also facing various conventional and unconventional threats that include growing military power of the PRC, territorial water and island disputes in the East China Sea and South China Sea, strategic competition between major powers, proliferation of weapons of mass destruction, and spread of terrorism. Asia Pacific countries have thus increased arms procurement, further fueling the elements of regional instability.

( I ) Expansion of the Military Power of the PRC

The PRC has, in recent years, experienced rapid growths in its economy and increases to its comprehensive national power, allowing it to initiate large-scale military modernization efforts. The PRC is also actively pursuing amicable diplomacy with its neighbors, and is an active participant of international humanitarian assistance missions in the hopes of alleviating fears and concerns about its growing national power and military strength. However, the PRC has maintained massive increases in its defense budget for many years, undertaking rapid modernization and development of its military structure. This has led to an increasing imbalance of cross-Strait military power as well as growing doubts and wariness amongst neighboring countries.

In 2015, the PLA has issued the Directive on Military Training as part of continuing enhancement of basic military training across services. By integrating training with field exercises, the PLA has gradually reformed its training programs and created innovative strategies for enhancing the PLA's coercion and war-fighting capabilities under informatized conditions. The PRC's 2015 white paper “PRC Military Strategy” described improving trans-theater mobility for its army, combat readiness patrols and blue seas training for its navy, and long-range operations and maritime flight training for its air force. The PLA is also taking advantage of its exercise and training activities to expand its operational depth and demonstrate to the world that its operational capabilities has reached the first island chain and is expanding towards the Indian Ocean and the second island chain. Additionally, the PLA is also developing anti-access / area denial (A2/AD) capabilities, tactics, techniques, and procedures in order to coerce foreign military forces from intervening in Taiwan Strait or Asia Pacific affairs, in order to ensure its core national interests and secure the areas crucially related to PRC's overseas interests.

Current land and maritime disputes in northeast Asia include sovereignty issues and boundaries of exclusive economic zones (EEZ) for Diaoyutai Islands, gas fields in the East China Sea, the Kuril Islands, and Dokdo/Takeshima Island. Of which, the ROC's disputes with Japan include the sovereignty of the Diaoyutai Islands as well as rights to fishing and maritime resources resulting from overlapping EEZs. The government of the ROC complies with the President's directives for the East China Sea Peace Initiative, and proposes to resolve the disputes peacefully based on the conventions of the United Nations and relevant provisions in international law. This proposal has been positively received by public opinions around the world.

In the South China Sea, land reclamation has been carried out by the PRC, Vietnam, the Philippines, and other claimants in the region. In order to strengthen its sovereignty and claims (by international law) over the South China Sea, the PRC has employed various state-owned vessels in exercising its sovereignty and legal rights while constructing and expanding infrastructure of the Xisha (Paracel Islands) and Nansha (Spratly Islands) to establish a permanent and combat ready military presence in the region, leading to protests from the Philippines and Vietnam as well as concerned observations from the US and Japan. As a claimant to the South China Sea, the ROC has recently proposed the South China Sea Peace Initiative, which calls upon all countries to shelve disputes and promote joint development, a proposal that has gained global praise. However, before territorial, maritime and sovereignty disputes can be resolved properly, reactions from neighboring countries will continue to induce and affect the security environment of the Asia Pacific region.

Strategic coopetition between the US, the PRC, and Russia are becoming increasingly complex. Although the US and the PRC have collaborated on issues regarding global climate change, suppression of terrorism, and development of new energy resources, the two countries remain contentious in other issues, such as the East China Sea and South China Sea sovereignty disputes, regional economic and trade integration, network security, and human rights. Economic sanctions imposed upon Russia by the US, Japan, and the EU also incited the comprehensive strategic partnership between the PRC and Russia, increasing the uncertainty of the Asia Pacific environment.

In addition, to break through the stranglehold imposed by the US-led international order, the PRC and Russia have expanded the Shanghai Cooperation Organization (SCO) in order to develop a new multilateral global order while strengthening PRC and Russia's influence in global affairs.

As nuclear energy, nuclear technology, as well as applied biology and chemistry technologies become widely employed throughout the world, the potential risk of proliferation of raw materials used to generate nuclear energy or produce biological or chemical weapons has grown as well. Iran's nuclear weapons program is showing signs of positive development. However, North Korea has not given up on nuclear weapons testing. Chemical weapons were also employed during the Syrian Civil War. The chances of terrorist acquiring these weapons have greatly increased as well. Potential weapons proliferation may also result if improper supervision is provided for the weapons of mass destruction.

Global economies and markets are increasingly interconnected. Ups and downs of a single country's economy will influence regional or even global economic development. For example, the Greek government-debt crisis has affected Eurozone economy. Stock market fluctuations in the PRC also substantially affected various countries in the Asia Pacific. Strategic competition between the Trans-Pacific Partnership (TPP) offered by the US, Regional Comprehensive Economic Partnership (RCEP) offered by ASEAN, and the One Belt, One Road program offered by the PRC is likely to direct additional global investments into Asia Pacific markets while intensifying market competition. Regional economic security issues are likely to increase accordingly as a result.

Global terrorism has employed the speed and convenience offered by global information networks to spread extremism, religious fanaticism, and sectarian terrorism throughout the world. Terrorist targets are no longer limited to the US. Countries, such as the United Kingdom, France, Spain, Indonesia, and the Philippines, have all been subject to attacks by different terrorist groups. These incidents demonstrate that no single country is capable of fighting against terrorism alone as well as the necessity of having global counter-terrorism efforts.

In the last 2 years, extremist organizations, such as the Islamic State, made use of the Internet to broadcast hostage execution videos. The East Turkestan Islamic Movement also carried out terrorist attacks in the cities of Kunming (Yunnan Province) and Urumqi (Xinjiang Province). Both groups have thus been strongly condemned by the international community. Insurgencies in Southeast Asia include the autonomy movement of the Kachin Independence Organization in northern Burma, independence movement of the Sulu Army in the Malaysian state of Sabah, separatist movements in southern Thailand (involving three provinces), and Muslim Separatist Movement in the Philippines. All these insurgencies have been a main cause of frequent terrorist attacks in their respective regions, and have affected regional security and economic development.

As a result of climate changes, globalization, and convenience of international travel, the emergence of new communicable diseases, such as avian flu, novel influenza, superbug (NDM-1), Ebola, and norovirus, have been reported. Outbreaks, such as the 2014 Ebola outbreak which wreaked havoc throughout West Africa with a range of spread that went beyond initial forecasts as well as the 2015 Middle East Respiratory Syndrome (MERS) coronavirus in the Middle East and South Korea, also pose challenges to current health and disease prevention systems while threatening global economic activities.

Global warming has led to increases in sea levels, encroaching tides along coastal regions, and floods in urban areas that threaten various infrastructures. Increasingly hot summers have also led to deaths and disease. Droughts have already begun to reduce food production. If these issues are not handled accordingly, the entire world will have to handle the resulting consequences. Currently, international conventions such as the United Nations Framework Convention on Climate Change (UNFCCC) and the Kyoto Protocol serve to regulate carbon emissions for countries around the world. However, conflicting opinions have begun to emerge between developed and developing countries while results of carbon reduction efforts have failed to reach expectations. Global warming is still worsening, severely affecting ecologies and economic development in various countries around the world. 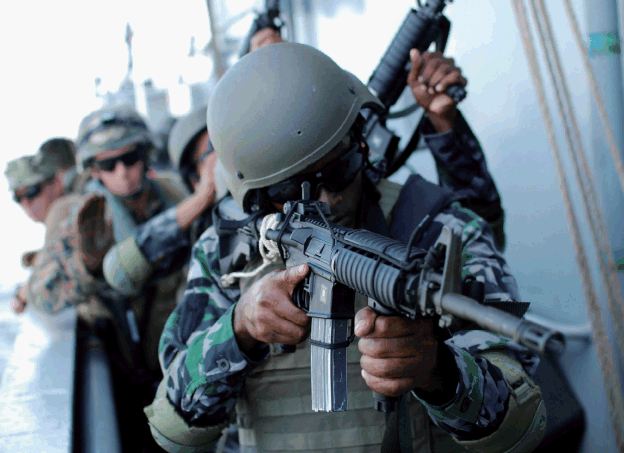 Terrorists have rallied to the call of extremist organizations such as the Islamic State to launch attacks around the world, negatively affecting regional security and economic development. counter-terrorism activities have thus become a key focus for countries around the world. (Source: US navy) 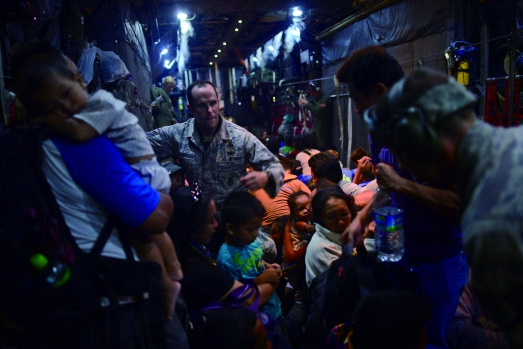 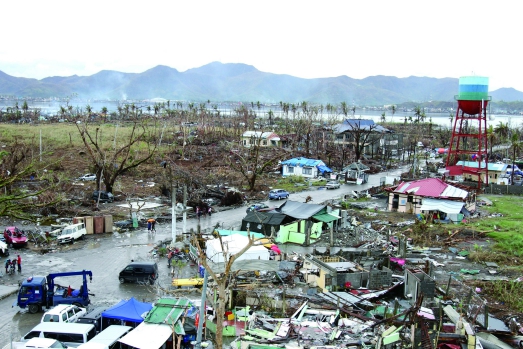 1.2.Climate change is one of the most pressing global issues. Rising sea levels and tidal waters will flood coastal cities and threaten to damage relevant infrastructure. Increasingly hot summers have led to death and disease, while droughts have led to gradual decreases in food production. The picture shows the disastrous effects of Typhoon Haiyan in the Philippines. (Source: US navy)

Crude oil and gas are strategic sources of fuel and raw materials for modern industries. However, most petroleum producing countries in the world happen to be located in the Middle East, a region rife with armed conflicts. Thus, various countries around the world have become concerned with issues of safe energy resource delivery and price stability. To oppose the economic sanctions imposed upon it by the EU, Russia has stopped supplying Europe with natural gas as a form of retaliation. Failure to resolve this issue effectively is likely to impact European economic development.

Global population is expected to reach 9 billion people by 2050, with water consumption increasing by 55% as a result. Forecasts have shown that by 2030, global water supplies may only be sufficient in satisfying 60% of the requirements, leading to insufficient global water and food resources. This issue is compounded with climatic anomalies as well as increasing demands in emerging countries. Food exports have reduced significantly, leading to increasing food prices as well as widening rich-poor divide. Less developed regions and countries will be worst hit, leading to popular uprisings, public unrest, disrupt social and political balance, and affect regional stability.

The 2015 National Security Strategy released by the US pointed out that cybersecurity remains one of the most daunting challenges faced by national, public, and economic security efforts. For national security, cyberspace attacks can be employed as a formidable military weapon. Enemies can use the Internet to paralyze key infrastructure such as communications, transport, and traffic systems to affect military capabilities. They may also sabotage financial and trade networks, water supply, power systems, and air navigation control systems to disrupt social order. Such attacks therefore pose serious threats to the survival and development of any country.

Targets of international terrorism are no longer restricted to the US, showing that counter -terrorism work must be jointly carried out by the international community. (Source: US navy)