To raise public awareness on the close ties between all-out defense and national security, the MND has been actively using multiple educational channels to improve the people's all-out defense knowledge and patriotism. We have also been organizing dynamic, diverse and fun educational activities to attract the people's attention and participation in national defense activities, thus helping to create their supportive mentality and actions for the defense of our nation.

For the purpose of connecting young students with educational institutions and forces of the military, we have been hosting events, such as in-depth conversations with youths, dialogue with social groups, and all-out defense education and recruitment drive during group activity hours in various schools, to win students' recognition and support to national defense activities. Additionally, in order to strengthen integrative learning in both junior high and elementary school level, we have been providing music lessons for schools in remote villages and shooting courses for senior (vocational) high school students. Furthermore, we have been hosting 63 groups in 17 categories of summer camp annually, such as summer combat camps and Spratly Islands study camps, etc. There are 6,056 individuals attended those activities from 2014 to August 2015 (per Appendix 7-1).

In accordance with the Enforcement Regulations Governing the Implementation of All-out Defense Education by Government Agencies (Institutions), the MND has been assigning its specialized instructors to go on tours for 70 governmental agencies and local governments to give intensive all-out defense courses in the form of on-the-job training (OJT). We have held 376 OJTs for 43,230 participants from 2014 to August 2015. In addition, we have been using eLearning website established by the Executive Yuan to establish an All-out Defense Education Workshop to deepen the disclosure of all-out defense concept and enhance the effectiveness of our OJTs.

To showcase the results of force buildup and combat readiness of the ROC Armed Forces, we have been organizing the national defense educational tours during the annual open house events at our military bases. From 2014 to August 2015, we had organized 6 events, including the one at the ROC Army Armor School, with 281,946 visitors (per Appendix 7-2) attended. We have also been hosting contests of essay, poster, animation, and teaching plan for all-out defense education, and organizing online quizzes with prizes. We have been supporting universities and local governments to organize promotional activities in order to strengthen public awareness on the concept of all-out defense.

To help preserve historical national defense relics, the MND, following the government's policy of promoting tourism, has been working with the Ministry of Culture, the Ministry of Transportation and Communications, and local governments to pick out locations of historical national defense significance for tour packages. Accordingly, the MND has been producing a series of documentaries titled Introducing National Defense Relics and Military Sites in Various Counties and Cities. In 2014, we completed the production of documentaries for Penghu County, Kinmen County, Lienchiang County, and central (eastern) parts of Taiwan. These documentaries can be viewed and downloaded from the official All-out Defense Education webpage, and their duplicated copies have also been delivered to local governments for local tourists' reference in order to maximize the efforts of all-out defense education. 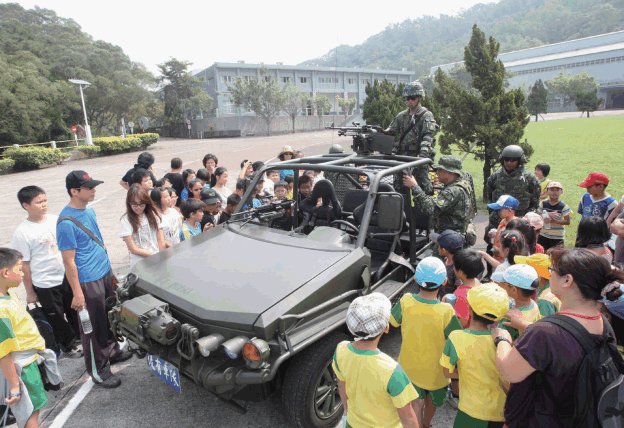 To showcase the results of force buildup and combat readiness of the ROC Armed Forces, the MND has been organizing the national defense educational tours during the annual open house events in order to strengthen awareness on the concept of all-out defense. 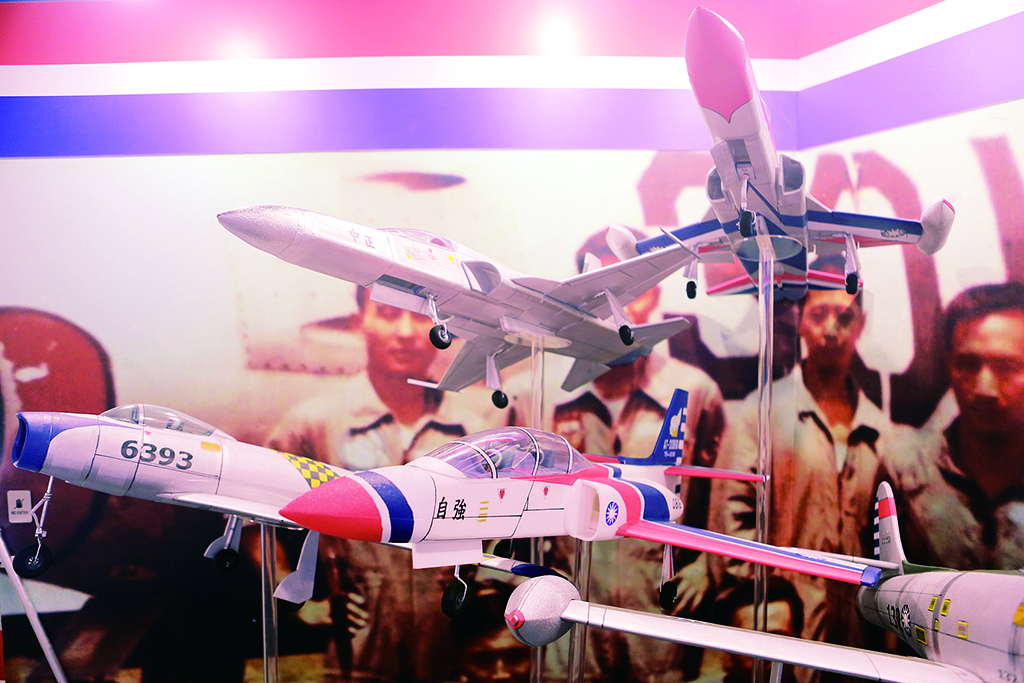 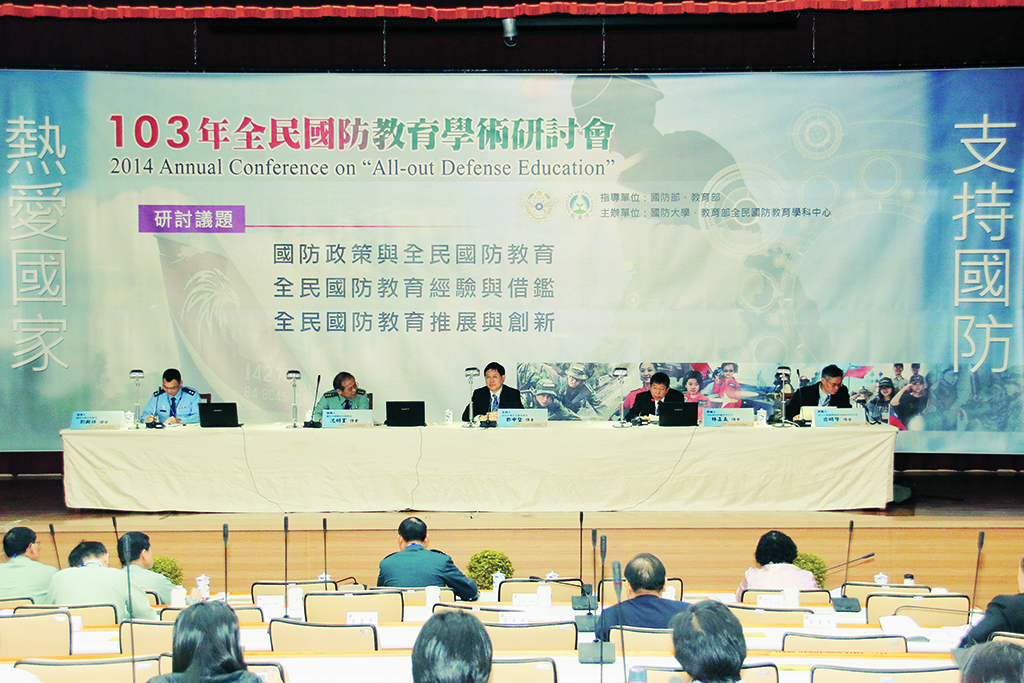 1.The ROC Armed Forces Museum hosted a special exhibition on the ROCAF Thunder Tiger Aerobatics Team. By aesthetically displaying historical artifacts, records, and other items of significance, we are presenting the chronicled history and contributions of the ROC Armed Forces so as to help the people to grasp a better understanding of the ROC Armed Forces' glorious history while promoting their awareness for national defense.

2.By hosting contests of essay, poster, animation, and teaching plan, organizing academic seminars, and giving support to universities and local governments for promotional activities, we may thus strengthen the people's awareness for the concept of all -out defense.

( V ) Carrying through Assessments and Commending Meritorious Ones

Pursuant to the All-out Defense Education Act, the MND has assembled staff in charge from relevant governmental agencies to conduct thorough and objective all-out defense educational assessments for 22 municipalities and local governments by means of document review and interview verification. In 2014, three local governments from the New Taipei City, Hsinchu City and Chiayi City were assessed as commendable. In addition, according to Regulations Governing the Rewarding of Outstanding Contributions towards All-out Defense Education, in 2014, 15 groups (agencies), including the Military Education Office of the Department of Education of the Taipei City Government, were assessed as commendable, and 26 individuals, including Major Tzu-hui Chuang stationed in the Chang Jung Senior High School were assessed as meritorious. In 2015, 17 groups (agencies), including the Chiayi County Liaison Office of the MOE were assessed as commendable, and 22 individuals, including Colonel Chang-chun Su of the National Defense University, were assessed as meritorious. They all received awards to demonstrate the efforts and hard work from every level of our society towards all-out defense education.

We have been publishing non-periodical collections for specific historical events and oral history. From 2014 to August 2015, we have published 5 historical collections, such as Interview Records on Service Members of Aboriginal Tribes of the ROC Armed Forces (as shown in Appendix 7-3).

In order to assimilate new knowledge, expand its international perspective, and enhance the professionalism for its cadre members, the MND has been introducing and translating foreign publications of expertise in 9 major categories: national security, global and regional security, military theories, revolution in military affairs, military operations, leadership, policy and strategy, public opinions and media, and risk management. There are 8 foreign military publications translated and reissued from 2014 to August 2015 (as shown in Appendix 7-4).

The Republic of China Armed Forces Museum is divided into 5 permanent exhibition rooms and 1 special exhibition room. Five permanent exhibition rooms are showcasing 5 major themes: Establishment of the Whampoa Military Academy and Unification of China during the Northern Expedition, War of Resistance against Japan, Civil War and Taiwan Strait Crises, Force Restructuring and Operational Readiness, and Military Arms. From 2014 to August 2015, the museum has hosted in the special exhibition room 3 special exhibitions: Legacy of Flying Tigers - 70th anniversary of the Chinese- American Composite Wing, 90th Anniversary of the Whampoa Military Academy, and Soaring High - Special Exhibition of the ROCAF Thunder Tiger Aerobatics Team. By presenting relics, historical documents, photographs, videos, equipment, models, simulated battlefields, and the like, and incorporating aesthetic means of illustrations, charts, innovative designs, data simulation and interactive experiences, these special exhibitions have displayed a comprehensive history and contributions of the ROC Armed Forces so as to increase the people's recognition of the glorious history and improve people's understanding of our national defense activities. There are more than 83,000 visitors attended these special exhibitions.