By upholding the Article 22 of the National Defense Act and policy directives of revitalizing economy and expanding domestic demands of the Executive Yuan, the MND has been continuing to release national defense resources to the private sector while encouraging private participation in our infrastructure projects. In addition, the MND has been promoting environmental conservation measures to implement energy saving and carbon reduction policies.

Following the releasing means of GOCO for military industries, outsourcing insensitive management activities, strategic alliance for maintenance, and domestic procurement of spare parts, we have been releasing national defense resources to the private sector so as to encourage private businesses to join in building our national defenses while invigorating our market economy and increasing employment opportunities.

In accordance with the principle that the ROC Armed Forces shall neither establish producing capabilities nor conduct overseas procurements for any product that can be supplied by domestic manufacturers, the MND has been releasing insensitive, low time-critical, and non-kernel capabilities to the private sector to improve its ability to conduct R&D, production and maintenance of military hardware. Additionally, the MND has been increasing the percentage of resources releasing by deducting expenditures in personnel, necessary overseas procurement for military hardware and maintenance, and non-transactional activities from the acquired national defense budget.

Complying with the Executive Yuan's policies and considering its future organizational functions and requirements for its force buildup, the MND has been absorbing emerging technologies (subject matter expertise) or management concepts from the private sector to revitalize its application and maintenance for assets and properties in order to improve overall public benefits and satisfy the mutual interests of both the government and the private sector.

In conformity with the Act for Promotion of Private Participation in Infrastructure Projects (AP3IP), the MND has been releasing items that meet the relevant criteria for private operations and management in order to reduce operational costs.

1.Released items fall into 2 categories: medical healthcare and recreation and tourism. 12 projects are underway, such as Outsourcing Management of Tri-service General Hospitals, and the total value of private sector investments is about NT$ 900 million.

2.In 2014, we have added a new project, generating over NT$ 40 million of investments. Projects, such as the Army Reunion Hall, Educational Exhibition Hall of the ROC Air Force Academy, Chung Cheng Armed Forces Preparatory School and the National Revolutionary Martyrs' Shrine, are now undergoing feasibility evaluations.

On the condition of without affecting combat preparedness and training, the ROC Armed Forces have been driving sustainable energy savings and carbon reduction education for environmental protection purposes, and has reached the goal of negative increase in annual fuel, electricity and water consumption. We have been working in accordance with the Executive Yuan policies on cleaning our homeland, maintaining biodiversity, and reducing environmental hazards to drive our benchmark environmental protection programs for green energy savings and implement energy saving and carbon reduction policies.

( I ) Environmental Protection Policies and Results

Since 1998, the MND has been earmarking supplementary funds for building noise control facilities in schools, libraries, medical institutions, public facilities and residences in the vicinity of airbases in accordance with the Noise Control Act and Noise Control Act Enforcement Rules. In 2014, NT$ 2.02 billion was allocated for such purpose, and was accounted for 91.94% in its category. We have earmarked NT$ 162 million for aviation noise control in FY 2015, and we are supervising the process fully according to designated schedule.

In 2014, we have done environmental cleaning work for 1,411 vacant buildings in 447 unoccupied properties of the MND and its subordinate units (total area of 2,151.53 hectares). The MND has been promoting all units to clean 50 meter premises around respective locations, removing a total 19,016 tons of garbage and waste. In addition, we have produced an exclusive report titled Important Knowledge for Sustainable Development broadcasted in Chu-Kuang (Glorious) Garden educational TV program, and the program was viewed by 175,000 individuals, helping promote the concept of environmental protection and low carbon emissions.

Fire ants invasion are being contained in 20 military properties. After receiving reports from the Council of Agriculture, we have followed standard operating procedures to spray insecticides and carried out other pest control measures. Aside from one military installation relieved from the control, there are another 19 properties still under pest controls.

Whitetop Weed (Parthenium hysterophorus) invasions have been reported in 1 military facility (affecting area of 0.078 hectares). After implementing control measures, the weed was eradicated from an area of 0.047 hectares, and current prevention rate of the weed is 60.25%.

There are 33 military facilities under pest control for biting midges (Forcipomyia taiwana). After being treated by pest control measures, only 8 of them would require further treatments.

1.In response to the Executive Yuan’s Four-saving projects among government agencies and schools, the MND has been actively promoting energy saving and carbon reduction measures, and demanding all its subordinate units to achieve negative growth objectives in annual fuel, electricity and water consumption.

2.Fuel conservation: Controls were implemented from 2007 to 2015 with the objectives of reducing overall administrative fuel consumption by 14%. Todate, fuel savings amounted to 27.14%, reaching the objective prescribed by the Executive Yuan. Administrative and combat training fuel usage in 2014 also achieved savings of 11.72% and 1.2%, respectively, compared to the same period of 2013, both of which have satisfied the 1% fuel savings objective for FY 2014 prescribed by the Executive Yuan.

4.Paper savings: As of August 2015, the usage of online signature and approval reached 81.85% in the organic units and defense agencies (institutions) of the MND, and 79.63% in service headquarters, military academies, and direct subsidiary establishments (forces) of the General Staff Headquarters, far exceeding the targeted 40% online signature and approval for FY 2015 prescribed by the Executive Yuan. 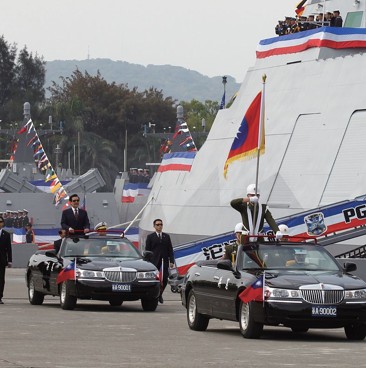