In accordance with the All-out Defense Mobilization Preparation Act, the MND has been integrating relevant governmental agencies and local governments to jointly prepare for all-out defense mobilization.

Our mobilization preparation program is divided into 4 sub items: guidelines, initiatives, categorized plans, and execution plans. Relevant governmental agencies have to complete and promulgate the required plans by their respective legally bound schedules. We have assembled all staff in charge from relevant governmental agencies to form a joint-review team for carrying out action reviews. Currently, we have promulgated all the relevant mobilization preparation plans for 2015.

The MND has been continuing to strengthen the interagency integration performance through the Comprehensive Operational Capabilities Coordination Meeting (COCCM) in various regions, and the 3-in-1 combined coordination meeting of mobilization preparations, COCCM, and disaster relief and prevention for municipal and local governments. Furthermore, we have been using scenarios of natural disaster and operational disaster relief, to simulate real flood season and combat operations, as perimeters in our annual wargaming exercise for in-depth discussion. Twenty two 3-in-1 combined coordination meeting are held semiannually. During the meeting, the MND announces current key objectives and applicable laws, and coordinate solutions for difficulties so as to maximize the efforts of coordination and integration (as shown in Figure 7-1 and 7-2).

To ensure the smooth operations of the mobilization mechanism, and to follow the revised mobilization regulations, the updated operational procedures, and lessons learned, the MND has been holding 4 all-out defense mobilization workshops every year. The MND has also been using social apps, such as Facebook and LINE, to disseminate information of mobilization know-how and disaster prevention reminders. Moreover, we have been taking opportunities of major events and online marketing activities of local governments to strengthen the people's concept of all-out defense, and adopting the 3-in-1 combined coordination meeting in disaster relief operations to enhance the performance of mobilization preparations.

In order to strengthen practical mobilization preparations and validate mobilization performance, the MND has been conducting the All-out Defense Mobilization (codenamed Wan-An) Exercises, in tandem with the National Disaster Prevention and Relief Exercises of the Executive Yuan. The exercises are led by municipal and local governments, and are divided into 2 phases:  wargaming phase and combined practices phase, focused on complex disasterprevention and relief practices. In 2014, more than 10,000 individuals from
police department, fire department, civil defense, medical institutions, and the ROC Armed Forces participated in the exercise. Over 2,000 vehicles, 4 vessels and 21 helicopters were mobilized as well. In 2015, Joint military and civil air defense (codenamed Wan-An 38) exercise and all-out defense mobilization and disaster prevention and relief (codenamed Min-An 1) exercise were conducted
with more than 10,000 participants from police department, fire department, civil defense, and the ROC Armed Forces. Over 1,000 vehicles, 21 vessels, and 13 helicopters were mobilized for these exercises. 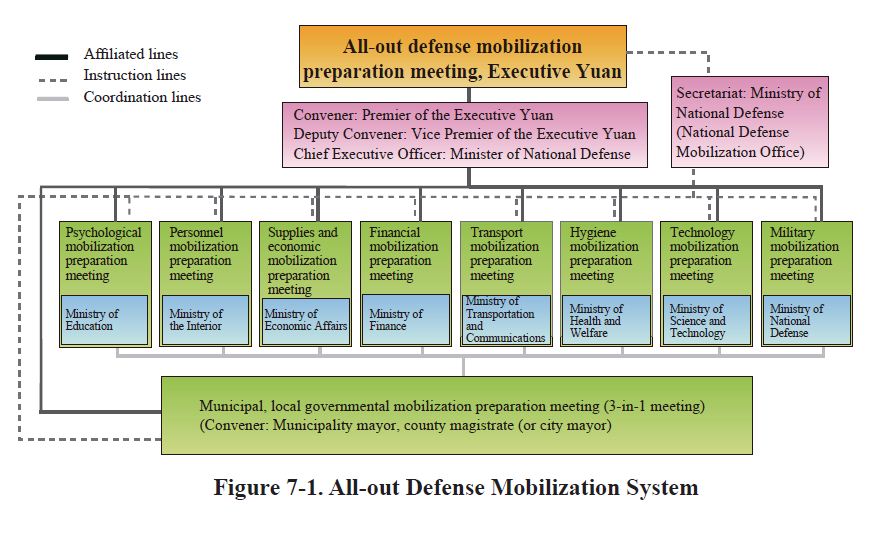 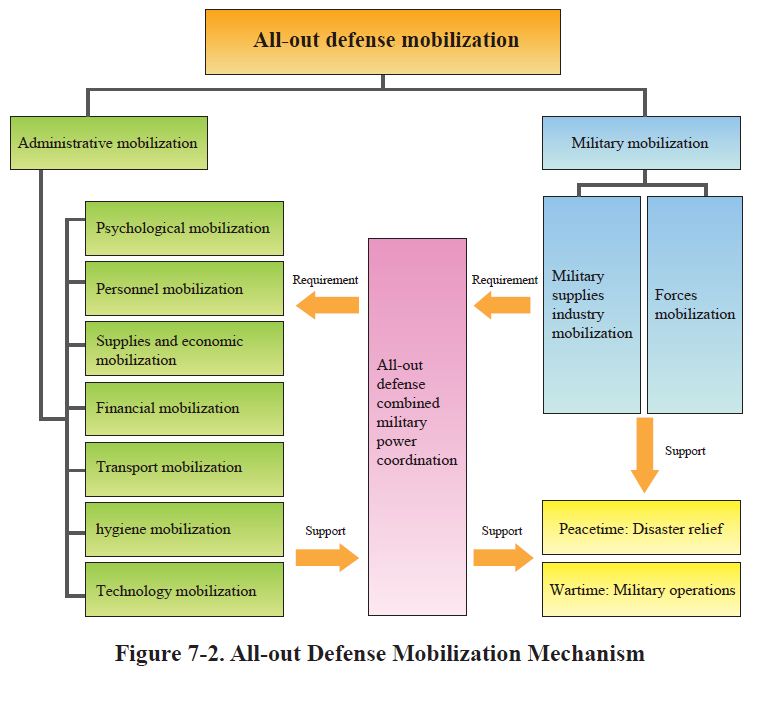