For years, military preparations and planning of the PLA have always been based upon Contingency Military Operations against Taiwan. Military exercises have been conducted against combat tactics, techniques, and procedures employed by the ROC Armed Forces. These exercises are part of the continuous preparations for large-scale military operations against Taiwan, and are implemented to improve precision strikes of the PLA ground artillery forces, strengthen long range target guidance and strike capabilities of naval and air forces, and enhance surface blockade (control) of neighboring shores and islands. Hence, there is still a risk that military confrontation between the PRC and Taiwan may erupt.

I. Military Capabilities Directed against Taiwan by the PRC

With support granted by its immense defense budget, the PLA has greatly accelerated its modernization of national defense and armed forces, and is preparing for emergency military operations against Taiwan as well as improving its overall joint operational capabilities.

( I ) Intelligence, Surveillance, and Reconnaissance Capabilities

( II ) Capabilities of the PLA Army

Under the directives of all-terrain mobility and three-dimensional attack and  defense, the PLA Army (PLAA) is accelerating its mechanization processes, making organizational adjustments at the brigade level, implementing informationized transformation, and conducting exercises and training in realistic conditions. Air transport and deployment, equipping of pontoon bridges, and tactical developments have been enhanced and tested in joint amphibious landing exercises to familiarize relevant units in the tactics, techniques, and procedures of landing operations. Currently, the PLAA is already equipped with triphibious landing and warfare capacities to seize offshore islands of the ROC.

( III ) Capabilities of the PLA Navy 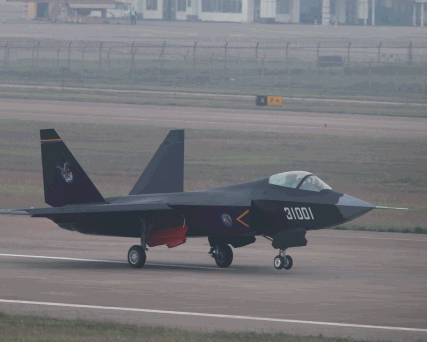 1.The PLAAF is operating under the balanced offense and defense strategic directives to continuously enhance its capabilities in overall air and missile defense, force projection, and enforcing strategic coercion. It is hoped that these measures will allow the PLAAF to establish or seize dominance and superiority in the maritime zones and airspace in areas west of the first island chain. 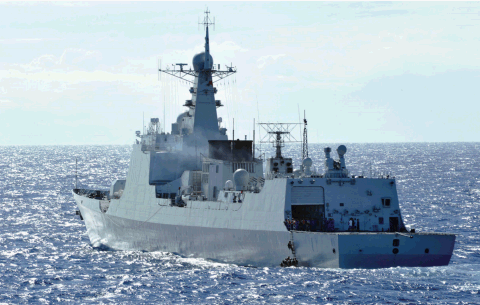 Under the strategic requirements of integrating air and outer space capabilities as well as conducting both offensive and defensive operations, the PLAAF has accelerated R&D as well as outfitting of its next-generation combat and supporting aircraft such as the J-20 fighters, H-6K bombers, KJ-200 and KJ- 2000 early air warning aircraft, and Y-20 strategic airlifter. The indigenous Hong Qi (red flag) series as well as Russia-made S-300 series air defense missiles have also been deployed along the Taiwan Strait. The PLAAF is also making plans to acquire the newest S-400 series air defense missiles from Russia in order to complete its missile defense system. To build an air force capable of seizing air superiority in the airspace to the west of the first island chain, joint exercises for different units have also been strengthened to accelerate digitization of command and control systems and enhance overall air and missile defense capacities as well as abilities to conduct air strike, strategic projection, and strategic coercion.

The PLA Second Artillery Force operates under the directives of being lean and effective and possessing both nuclear and conventional missiles, employing universal warhead designs to strike at a diversity of targets to strengthen its capabilities of strategic nuclear coercion, nuclear counterattack and conventional precision strikes. Estimates on missile quantity, precision, and destructive effects equipped by the Second Artillery Force indicate that the unit is capable of launching large-scale joint firepower strikes and deter external military from intervening in any Taiwan Strait disputes.

EW units at various levels of the PLA have recently employed simulated electronic environments of the Taiwan Strait during their training exercises in order to develop various EW tactics, techniques, and procedures. To secure EW dominance throughout the entire course of the battle, exercises of various PLA service branches were also carried out to identify weaknesses in EW tactics and to formulate countermeasures accordingly. Current EW software and hardware attack equipment is also undergoing performance evaluations to monitor and collect electromagnetic parameters as well as to achieve capabilities of disrupting and interfering with ROC Armed Forces surveillance and command and control systems.

The PLA has established basic offensive and defensive cyberwarfare capabilities at various military departments that include its military commands, 7 military regions, defense research agencies, defense mobilization information systems, and militia forces. In addition to using hackers to plant backdoors for stealing and transferring data, the PLA is also capable of using programs to acquire control privileges over the target server. PLA cyberwarfare units have also managed to infiltrate a target and remain undetected for 1,700 days. These cyberwarfare units are large and highly specialized organizations capable of dealing with information defense technologies employed around the world.

The PLA has recently launched various military satellites into space. These satellites allow 24/7 military command, control, and intelligence transfer capabilities and are capable of supporting long-range precision strike missions carried out by the PLA in areas to the west of the first island chain. The BeiDou Navigation Satellite System provides coverage over the west Pacific to the Indian Ocean, offering effective improvements to real time targeted surveillance as well as the accuracy of long-range precision strikes.

II. Military Threats Posed by the PRC against Taiwan

Although evaluations conducted by the PRC revealed gradual improvements of cross-Strait relations, the PRC is still emphasizing that separatist forces are posing a threat to its territorial sovereignty and security. In recent years, the PLA has been continuously equipping its forces with major defense equipment such as amphibious assault vehicles, long-range multiple rocket launchers, surface combatants, long-range anti-ship missiles, third generation fighters, air defense missiles, and other major defense equipment, while the Second Artillery Force have continued to deploy missiles against Taiwan with particular focus on improvements to long-range projection capabilities. The PLA plans to complete the establishment of a formidable military arsenal for conducting military operations against Taiwan before 2020.

Observations of recent PLA military training and exercises showed that the PLA has yet to reduce targeted military exercises against Taiwan. The PLA has been emulating western nations in adopting actual-size replicas of critical political and economic targets of Taiwan when carrying out its military deployment exercises, demonstrating that the PLA has regarded military confrontation over Taiwan as a regular part of its combat preparations. Overall military power of the PLA is now capable of conducting joint military coercion, joint blockades, and joint strike operations. Furthermore, increases in the quality and quantity of PLA military strength allows it to pursue intensified military operations against Taiwan while providing it with additional mobility in deploying troops across the Taiwan Strait.