( I ) In order to ensure peace in the Taiwan Strait and preserve territorial integrity, and regional stability, the ROC Armed Forces have adopted the military strategic concept and guidelines of resolute defense and credible deterrence. By this way, it is hoped that through a comprehensive joint operations mechanism and modernized battlefield management, coupled ith an effective diversified deterrent means, we may obstruct enemy's ower projection, and initiate deep strike against it so as to damage, ontain and consume its abilities of invasion and mobility.

( II ) To build a Hard ROC defense force, our joint operations shall focus pon enhancing long-range precision engagement and synchronized oint operations capabilities. When faced with hostile incursions, we ill consolidate forces and firepower of the Army, Navy and Air Force, nd properly position them according to their respective performance. recision strikes, multi-layered interception, attacks against enemy at nchorage areas and beach heads, and other innovative / asymmetric actics shall be carried out in phases of joint interdiction and annihilation f enemy at anchorage areas and beach heads so as to obstruct enemy's ntention of rapid conclusion of war, and thereby achieve success in afeguarding the territories of Taiwan and the Penghu islands.

( I ) The ROC Armed Forces have responded to changes of the enemy and rends in defense technology developments and integrated them within ilitary restructuring programs. For the purpose of improving the joint perations command system performance and safeguarding national ecurity, the ROC Armed Forces are actively pursuing the strength eeded to acquire electromagnetic dominance and expanding EW apabilities. Through the integration of data links, the Armed Forces are also expanding command and control systems as well as surveillance capabilities. A Common Operational Picture (COP) has thereby been established to improve battlefield transparency. Synchronized awareness over battlefield dynamics has been established within the units of various levels, so as to strengthen their battlefield monitoring capabilities and their abilities for effective battlefield management, ensure the integrity and comprehensiveness of joint operations command and control functions, and meet the needs to conduct defensive warfare.

( II ) Additionally, in order to strengthen the countermeasures and defensive capabilities of command, control, communication, computer, intelligence, surveillance and reconnaissance (C4ISR) systems, and improve our flexibility of troop deployment during defensive operations, in recent years, the ROC Armed Forces have acquired long range surveillance radar, P-3C anti-submarine aircraft, mine sweepers, fuel and ammunition replenishment vessels, Swift Sea corvettes, unmanned aircraft systems (UAS), Cloud Leopard Infantry Fighting Vehicle, LT-2000 MLRS, AH-64E helicopters, UH-60M helicopters and many other modern military hardware. The Armed Forces have also completed upgrade programs for F-16A/B, IDF fighters, E-2K airborne early warning aircraft, and PAC-3 missile systems. According to the directives for defensive operations of Taiwan and Penghu islands, in the future, we will seize the
opportunities of various joint operational exercises and training to verify the operations of our command mechanism, adequacy of our innovative / asymmetric capabilities and defensive operational plans, with focuses on organizational adjustments of the Jingtsui Program and deployment of new capabilities, so as to ensure that the ROC Armed Forces are able to exert the full potential of our joint operations capabilities.

Based on the principles of increasing intensity of joint operational training, integrating similar exercises, and improving training assessment standards, the ROC Armed Forces have planned major annual exercises, such as Han Kuang (HK) and Lien series to integrate and assess training performances of the participating units in order to combine training, exercise, and operational readiness together, so as to achieve the objectives of training for war and integrating training with operations. 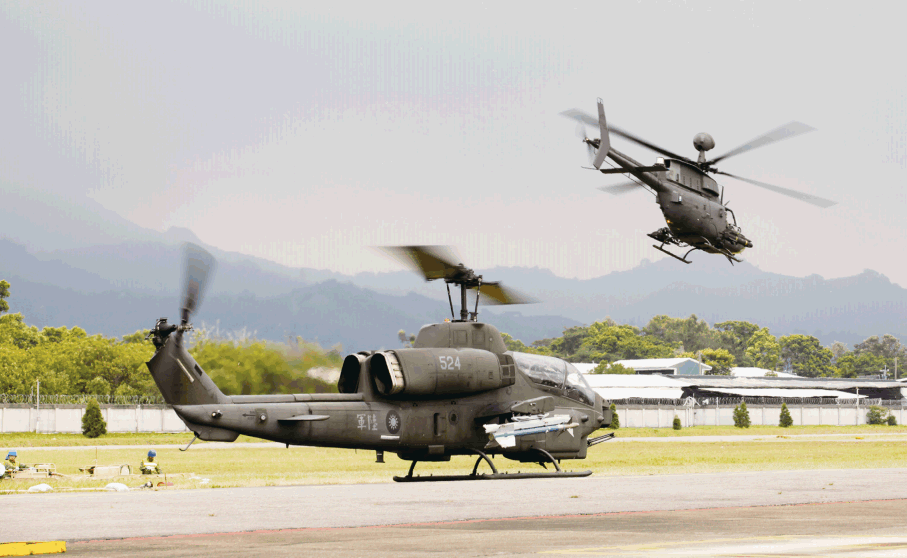 The purpose of the annual Han Kuang Exercise is to take the form of joint operations of the Army, Navy and Air Force to improve our early warning capabilities, command and control performance, and verify our new capabilities.

To enhance the ROC Armed Forces joint operational command systems as well as strengthen force buildup and combat preparations, the annual Han Kuang Exercise is divided into a command post exercise and a field training exercise in a fashion of joint operations with an aim at undergoing computer-simulated wargaming first and field training later. The focuses of the exercise include: protecting cyberspace, improving early warning, enhancing command and control, protecting critical information facilities, countering unmanned aerial vehicles (UAV) and guided weapon attacks, verifying the abilities of the deployment of new capabilities, coordination of interagency efforts, and integration of joint firepower. 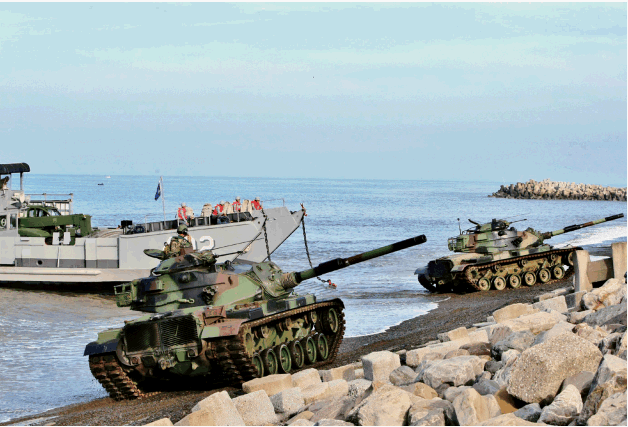 The Joint Amphibious Task Force is composed of Marine brigades as well as naval and air units that have completed the annual amphibious base training. The Task Force shall be ordered to conduct landing and anti -landing exercises to improve naval amphibious disembarking as well as homeland defense capabilities in the theater.

The Joint Amphibious Task Force is composed of Marine brigades as well as naval and air force units. During the exercise, the task force shall act as the opposing and invading force and incorporate the scenarios of the field training phase of the Han Kuang Exercise to conduct joint amphibious landing and anti-landing exercises with forces in the theater to improve naval amphibious disembarking operational capabilities as well as homeland defense capabilities in the theater.

The Joint Operations Airborne Task Force commanded by the Air Force Headquarters is composed of aerial transport assets and Army airborne forces. During the exercise, the task force shall incorporate the scenarios of the field training phase of the Han Kuang Exercise to carry out joint airborne and antiairborne exercises with forces in the theater to verify its training performance as well as joint homeland defense capabilities.

The exercise scenario is based on offshore island defensive operations. Army Headquarters and Navy Headquarters shall direct the Penghu Defense Command, Kinmen Defense Command, Matsu Defense Command, Dongyin Area Command and Wuchiu Garrison Command to employ full scale combat readiness, establish an unified control to conduct ground and naval joint operational exercise with naval replenishing detachment in phases, so as to verify the status of preparedness and effectiveness of training of the participating forces.

The Lien Hsiang Exercise simulates incoming hostile threats according to planned scenarios. Participating units must initiate operations of force preservation before the opposing forces launch their attacks. Opposing forces shall adopt unfixed ingress routes from different altitudes to conduct aerial strike and deal a sudden blow at key defensive targets of the ROC Armed Forces. Its purpose is to evaluate air defense capabilities and measures of joint, regional, garrison (key nodes and harbors), field units and naval fleet of the ROC Armed Forces.