To build a Hard ROC defense force, the ROC Armed Forces have followed the guidelines of training for war and integrating operations with training to maintain intensive training and exercises for all members. In order to improve basic combat capabilities of our personnel, we have focused upon their physical fitness, combined (and joint) training, camp (base) training, and precision missile firing training.

ROC Armed Forces directives treat physical fitness as national strength and believes that enhanced fitness strengthens the entire nation. After assessing and performing quantifiable analysis of various fitness tests, we revised the standards for 3 physical tests and their alternative tests in 2008. In 2010, a total of 8 ROC Armed Forces Physical Fitness Assessment Centers were established in order to provide a systematic, scientific, and rational physical training regime so as to effectively improve basic combat capabilities of all service members. In addition, following the government's plan of "Let's swim," and ensuring that every service member has basic swimming skills adequate for self-rescue, we have also employed conducive training models that greatly increased the prevalence of swimming training and the number of personnel with qualified swimming skills. Additionally, in sync with the promotion of volunteer force, we have added combat physical fitness and mixed-martial art training in 2015 to enhance the basic physical fitness of our volunteer service members.

II. Realizing a Well-rounded Base Training

In the volunteer force, the term of enlisted personnel is extended to 4 years. The original concept of single Military Occupational Specialty (MOS) with single capability of the enlisted personnel is no longer satisfying the cost requirements of long service term and increased professionalism. Therefore, to increase the flexibility of assigning operational personnel and reservist management, a training program of single MOS with multiple capabilities must be implemented accordingly to ensure all service members proficient with all weapons and all military skills at the company (and below) level. Base training shall also incorporate intensified training at night, live firing, combat readiness training, routine combat training, and training of urban warfare skills and tactics. Professional training for cadre members and self-training of general MOS are intensified and the concept of management-training integration is realized so as to fully improve the overall effectiveness of base training.

Base training represents the core of field training, using actual battle conditions as training scenarios to strengthen live firing and force-on-force exercises to hone the tactics, combat techniques and skills, and improve combined-arms performance at brigade and battalion levels. In order to further enhance base training and achieve training objectives, the ROC Armed Forces are planning to acquire composite targets, multi-functional training fields, and laser engagement systems to create a force-on-force platform capable of judgment on the scene for participating forces so as to achieve training goals.

In order to strengthen long-range precision strike capabilities of our missile units, we have adopted a model to combined missile firing training of the Armed Forces since 2014. Random selection of units for assessment has been employed since 2015 in order to validate missile firing preparation and responsive capabilities of various units. In 2014 and 2015, the ROC Armed Forces have fired a total of 809 missiles of 32 models of 9 different categories. Not only the training objectives are effectively achieved, but the expiring missiles and munitions are also adequately consumed to reduce subsequent disposal costs.

The ROC Armed Forces have integrated technological training programs. In addition to the application of various current simulation training systems (769 systems of 86 categories) for tactics, combat techniques and skills to supplement field training, we are also focusing on acquiring training and simulation system for new capabilities and army close combat simulation system, and improving our theater joint operational wargaming system and simulation systems of all service branches. Plans have also been made to create a synthetic battlefield to achieve the objectives of reducing training costs, minimizing training risks, ensuring equipment availability, and enhancing training benefits. 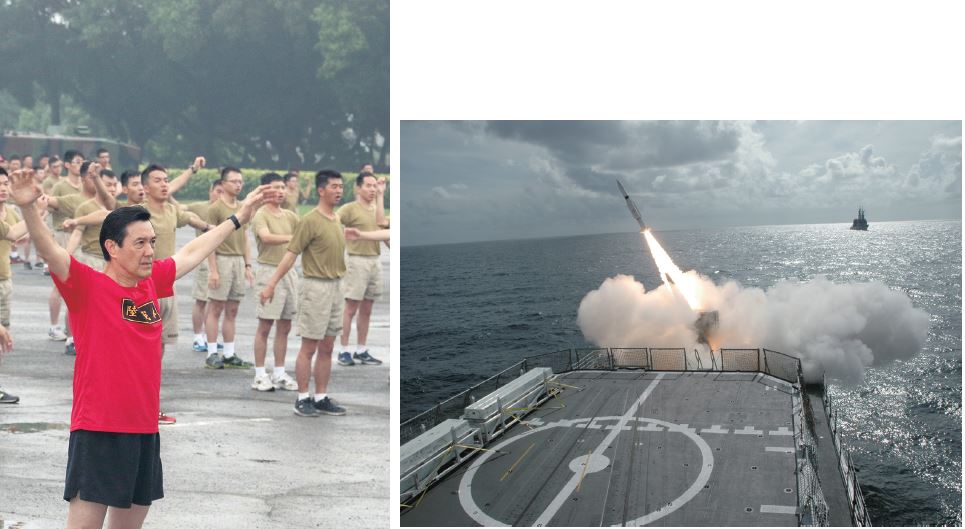 2.To strengthen long distance and precision strike capabilities of our missile forces, a combined firing training of the Armed Forces have been employed in an unexpected fashion to validate the effectiveness of firing preparation and responsive capabilities of the participating forces.