In response to security challenges, the MND has stipulated the defense strategy, which forms the foundation to direct the formulation and execution of the military strategy. Objectives of our national defense strategy are as follows: prevention of war, homeland defense, contingency response, avoidance of conflicts, and maintenance of regional stability.

I. Prevention of War

The MND has been continuing the national defense transformation and developing indigenous defense technologies, and creating innovative / asymmetric capabilities, so as to make the best of its compact but powerful punch to outfight a behemoth opponent. In order to improve joint operational capabilities, the MND is focusing on establishing capabilities for force preservation and infrastructure protection, training for regular forces, and implementation of the concept of all-out defense so as to effectively safeguard our homeland.

The MND, following the President's instruction to integrate national defense with diplomacy, has been driving military exchanges, and expanding strategic dialogues and substantive security cooperation with friendly countries, based on the principles of fairness, reciprocity, and practicality. Furthermore, we have been striving to attend combined military exercises with them, and working together on issues concerning humanitarian assistance, maritime search and rescue, counter-terrorism and counter-piracy, etc., so as to jointly establish a security cooperation mechanism and maintain peace and stability in the region.

Aside from promoting the policy of merging national defense with public welfare, the MND has been improving its defense technology and weaponry R&D, making efforts on revolution in military affairs, fulfilling the goal of civilian control of the military, deepening the concept of all-out defense for all the people. As a result, we may fully demonstrate the glorious traditions and martial valor of the ROC Armed Forces, and raise their professionalism and sense of honor so as to nurture our overall national defense strength.

The government policy on cross-Strait relations is constructed on the basis of being required by the nation, being supported by public opinion, and being supervised by legislature. Based on the principle of first the urgent, then the gradual; first the easy, then the difficult; first the economic, then the politics, the government will institutionalize cross-Strait negotiations stepwise so as to build up mutual trust between two sides. Currently, conditions for establishing confidence building measures (CBM) have yet to mature. The MND will follow the government's policies in the future to review pending issues in a cautious manner. 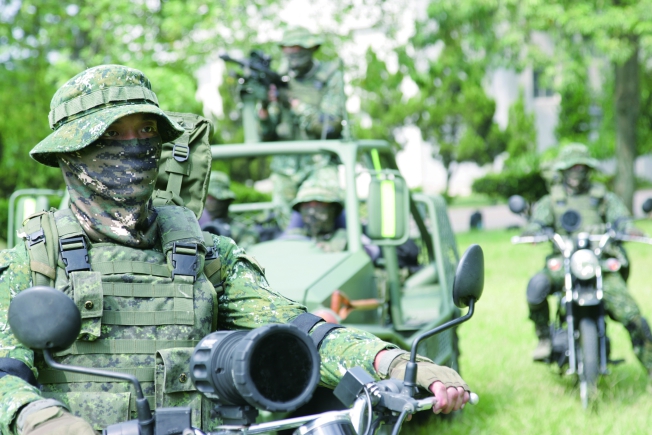 1.To transition into a volunteer force, the MND has been restructuring its organizations and improving professionalism of service members.。 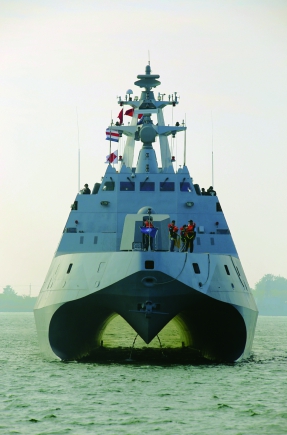 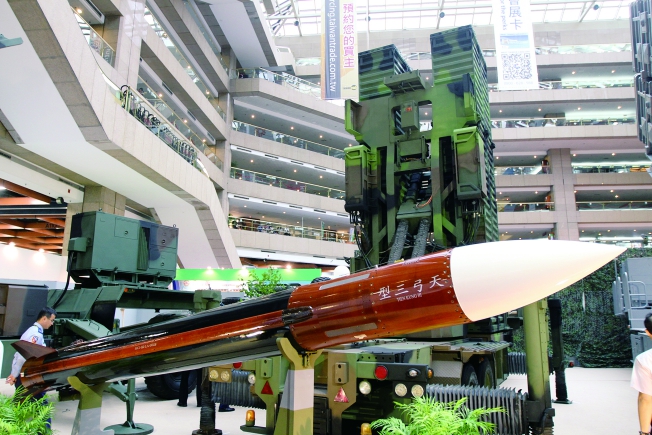 2.3.To maintain the strength of national defense, we have been developing equipment without foreign assistance, so as to accumulate viable indigenous R&D capacities to construct a modern military to our needs of national defense. 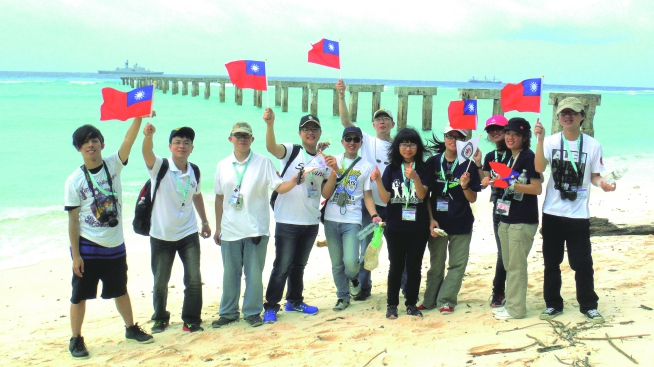 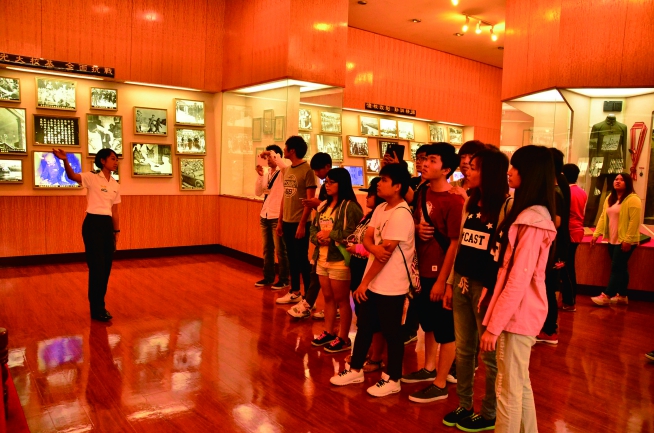 4.5.By extending all-out defense education (such as hosting study tours to Nansha Island, exhibitions in the Armed Forces History Museum), the MND may raise patriotism for all the people, and improve their faith in the ROC Armed Forces, and increase their participation in and support for national  defense efforts.

In tandem with the promotion of the Volunteer Military System, the MND has been restructuring its organization, and going through various associated measures, such as completing revisions for relevant laws and regulations, perfecting alignment of organization, manning and equipping, and force scale, etc., so as to refine its military structure to form elite armed forces.

To maintain a rock solid defense force, the MND has been developing and procuring modernized weapons. According to the policy of maintaining fundamental war-fighting capabilities while focusing on developing asymmetric capabilities, the MND has been adopting a dual track acquisition method of indigenous production and foreign procurement. Namely, weapons are to be produced domestically or procured from foreign sources if domestic production proves impossible. Priorities have been given to crucial technologies that developed locally, so as to help accumulate indigenous defense R&D capacities and build a modernized military force to our defense needs.

Facing possible minimum-warning and extremely powerful strikes from the enemy, the ROC Armed Forces have been bolstering their force preservation efforts, and striving to maintain redundancy for operational functions of all the systems in order to prevent paralysis caused by initial combat loss while preserving military strength for subsequent stages. In addition, the ROC Armed Forces will assist in keeping critical infrastructure, such as telecommunications, transportation, energy, reservoir, and power grid in working order, so as to ensure our sustainability in operations.

The MND has been extending all-out defense education to build public awareness for all-out defense, and improve public faith in the ROC Armed Forces. In addition, we have been pooling all the personnel, material, and financial resources together to materialize preparations for defense mobilization, and establish a well-rounded all-out defense system. Through educational recall training for reservists, we may thus maintain the combat capabilities of reserve forces to ensure rapid mobilization capacities both in peacetime and wartime.

In response to multitude of security threats, the MND has been integrating intelligence, surveillance, and reconnaissance capabilities of all subordinate units to enhance its intelligence gathering and early warning abilities. Intelligence exchanges are also carried out frequently with friendly countries to achieve effective prevention from, response to, and elimination of risks before they take place.

When the country comes under terrorist threats or sudden strikes from lurking enemy cells, the ROC Armed Forces joint operational command mechanism shall be activated to direct specialized quick response forces (QRF). To achieve the goals of preventing domestic contingencies and external assaults, the QRF shall follow the principles of stabilizing the situations, controlling the crisis, and unifying contingency responses to support establishments in charge and local governments to rapidly eliminate the threats.

We have been strengthening the authenticity of simulation drills for our forces to be quick responsive to contingencies, and for commanding officers to be proficient in the procedures for handling various contingencies, so as to provide just and proper responses to crisis once it occurs.

We have chosen specific units from existing military organizations to form forces with immediate response, disaster prevention, and containment capabilities. As part of the preparations, the MND has been absorbing experiences from foreign countries and integrating them with government-organized disaster prevention drills. In addition, the MND has been procuring equipment that can be employed both in combat and disaster relief operations, and making the best of reservist mobilization capacities so as to improve disaster prevention abilities of the ROC Armed Forces.

The MND has been implementing information transparency measures, such as regular announcements of military exercises, releasing of the National Defense Report, and hosting open house events, etc., to allow neighboring countries to understand the purpose of our defense policy, resources utilization, budget planning, weapon development statuses, and military activities. It is hoped that through increased mutual understanding we may reduce the possibilities of regional military conflicts.

All units in the ROC Armed Forces are required to comply with principles and readiness rules of crisis prevention, situational awareness, emergency response, rapid management, and escalation avoidance as well as not provoking incidents, not escalating conflicts, and reducing hostilities in order to avoid frictions arising from misjudgments or accidents that may lead to unnecessary conflicts.

The MND has been participating in regional affairs, and complying with the sequence of establishing relations, strengthening ties, reaching consensus, forging a friendly atmosphere, and establishing substantive partnership to promote security dialogues and exchanges with various countries in the Asia Pacific region, and maximize the strategic defensive functions of the ROC in the first island chain in the West Pacific. The ROC also plays a crucial role in both conventional and unconventional security issues in this region and is an active contributor to regional peace and stability.

The MND upholds the principles of safeguarding peace, and dedicates itself to suppressing terrorist activities. Therefore, the MND has been making personnel and intelligence exchanges with neighboring countries, and seeking opportunities for joining multilateral exercises. The MND has also been working with overall diplomatic policies of the country to provide humanitarian assistance as part of our obligations to the global community.

( IV ) Comply with the Non-proliferation Treaty

In compliance with international norms, the MND does not produce, develop, acquire, store, or use nuclear weapons, and instead only develops defensive weapon systems. The MND has also been exercising control over the export of articles related to sensitive technologies and missile systems in order to demonstrate the country's non-proliferation efforts.